July 24, 2018
My name is Antoinette Kumalo. I’ve always thought I’d be a story teller through acting, but when I started writing in my teen years, as do a lot of girls diarize in that age, I discovered another way of telling stories and I loves it. It broadened my horizon. I started editing for my friends.

The more I read the better I got at writing, and ventured into script writing for films. Through the encouragement of friends who loved what I wrote, I published my first novel, Alexandra. The reception has been so great and it has lead me to public speaking. I’ve received a lot enquiry from aspiring writers looking to publish their work that I co-founded a company called Precious Flower Media House be bridge the gap.
Currently we’re in a process of publishing my former high school teacher and looking forward to making many more visual dreams come true as per our slogan. 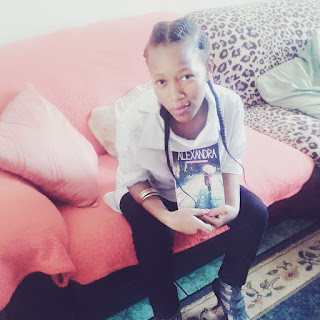 In an interview to TALKTOBLOGGER.COM, Antoinette Kumalo gets talking about her books, readers, roaring success, and of course her thoughts on life! Catch the interesting conversation here!

What motivates you to write?
Anything really. Writing is an out let to express myself. Sometimes it’s entertaining, and sometimes it’s to celebrate. While other times it’s to communicate. Writing for me is a way to connect to the outer audience.

What was the feeling when your first book got published? How did you handle that moment of glory and self-pride, were people supportive or something else?
It was both surreal and exciting. I was very proud of the achievement, of actually seeing my dream right in front of me, tangible. I was very happy. Until I realized an error in the printing but all the books were printed. Luckily, it turned out to be silver lining because now that error is what distinguishes my book from others and the loves it. It's no longer an error.

How do you take writing novels, as a career or hobby or between both?
Both, It’s a beautiful hobby that enables me to live off and that makes it a career. It’s never a struggle or strain to write and I can write anytime inspiration hits.

For your books you must be doing a lot of research topics and themes. How did you go about it?
I used the internet. But I also asked a lot of questions from my elders. I drew inspiration from books I’ve read and shows I’ve watched.

What is the best aspect about your writing that you love most?
I love when that one piece of the puzzle finally comes into place and it makes the story comes together. When I no longer have to think about what comes next but the words just come flooding in.

Tell us about your recently published book or the upcoming book?
My book was published in April of 2018 through my company, Precious Flower Media House. It's titled Alexandra. A dual story of (Alexandra) as she wakes up from a coma to discover that she is trapped inside her head and trying to understand what happened, and fighting a huge corporation that intends on building a lodge on a land that is promised to the community. When the corporation retaliates, Alex, as she affectionately known and everyone she loves is put in harm’s way. Alexandra must rely on an apparent enemy for survival but will falling for him compromise her mission.

There are many new writers out there who are aspiring to get their work published. What would you say to them?
Be patient and do your research. Getting published is a long process but you need to know what who’s publishing. Know the ins and out of the business. And finally find alternative ways to finance it.

Thank you so much Antoinette Kumalo, for sharing your experience with us. This will definitely help others to learn from it. If you liked this interview, share it with your friends on Facebook, Instagram, LinkedIn  and Twitter.

August 21, 2018
Florencia LaChance was born on August 11, 1967 and spent most of her childhood being raised in Maine.  She was given up to the State of Maine at age 13, after suffering sexual and physical abuse and became extremely rebellious and self-sabotaging.  With the help of some key mentors, she got herself together by age 16, emancipated herself and became self-supporting. At age 17 she was accepted to Boston College, an achievement after being in over 16 foster homes.  She had a son two months after turning 19, Joshua (aka Whoislogic on Soundcloud and Insta) who motivated her to truly make something of herself.  Mulatto: Daughter of America is her 8th book, first published and currently a Top-Seller in YA Bio.

In an interview to TALKTOBLOGGER.COM,Florencia LaChancegets talking about her books, readers, roaring success, and of course her thoughts on life! Catch the interesting conversation here!

What motivates you to write?
I write because I must.  I am filled with ideas. Stories, fantasy’s an…
5 comments
Read more

October 23, 2019
I am an entrepreneur by soul and writer by passion. I started very early into the business arena and launched my IT/ERP company when I was 28 years old. Since then life has been a roller coaster ride with a lot of ups and down for me but earned some amazing experiences which I treasure as achievements.
Writing was something I tested in my younger days but it took a serious passion after Facebook came into existence and I started posting extempore on Facebook. “Rooh” is my first published book on poetry. My achievement for the book is that it has been overwhelmingly received and praised by readers. I was also lucky to get reviews on ‘Rooh” from famous writer/poet, Shree Munnawar Rana ji. Rooh is not just a book but accumulated treasure of emotions and feelings of humans, which everyone will experience while reading it.
In an interview to TALKTOBLOGGER.COM,Mehul Davegets talking about his books, readers, roaring success, and of course his thoughts on life! Catch the interesting conversa…
Post a comment
Read more

June 30, 2019
I am a mum of 4 adult children and 1 teenager. I went public with my autobiography specifically to help people who find themselves in a dark place like used to be in. I hope you enjoy reading my story.
In an interview to TALKTOBLOGGER.COM,Elizabeth Moldovangets talking about her books, readers, roaring success, and of course her thoughts on life! Catch the interesting conversation here! What motivates you to write?
I write very simply and enjoy helping other people by encouraging them and receiving very positive feedback from them. I get very motivated to keep writing about my life. What was the feeling when your first book got published? How did you handle that moment of glory and self-pride, were people supportive or something else? There really was no moment of glory or self pride. I was quite shocked because I had no control and the entire process was rushed and I felt a lot of stress because the publishers seemed to have no clue as to what they were doing. Initially they sent the …
1 comment
Read more