November 30, 2017
Sharon Gupta is a Civil Servant and a writer. She was born in Delhi in 1970, graduated with English Honours from St. Stephen’s College, Delhi and went on to acquire a Master’s Degree in English Literature from Delhi University. She joined the Civil Services in 1994 and is currently posted in Chandigarh in the field office of the Ministry of Communications. She is married and has a teenage son. 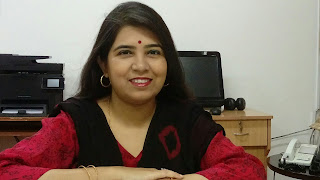 Sharon began writing at an early age and she was Student Editor of her College magazine, The Stephanian. Her articles and short stories have been published in leading newspapers and magazines and online, too.  Her Elizabethan thriller The Shakespeare Murders was released in October 2017 by Tara India Research Press. Her other works are showcased on her website: www.sharongupta.com and on her blog: sharonwriter.blogspot.in. She is represented by the Delhi-based Red Ink Literary Agency.

Besides writing, Sharon loves music. She plays the guitar. She speaks English, Hindi and French.

In an interview to TALKTOBLOGGER.COM, Sharon Gupta gets talking about her books, readers, roaring success, and of course her thoughts on life! Catch the interesting conversation here!

What was the feeling when your first book got published? How did you handle that moment of glory and self-pride, were people supportive or something else?
The feeling of seeing my first book in print by a traditional publisher was exhilarating! I was excited and overwhelmed, kept thanking the Lord for answering my prayers! My family and friends were very supportive since they’d all seen me struggle for years. I’d self-published a novel earlier but that did nothing to further my career as a writer. This- The Shakespeare Murders- was my first big break.

How do you take writing novels, as a career or hobby or between both?
Writing novels is my passion! It’s definitely more than a hobby. I want to be a successful professional writer so, yes, I hope it becomes my second career. Squeezing out time to write is the biggest challenge due to my responsibilities to my family and work as a bureaucrat. But the struggle is worth it.

For your books you must be doing a lot of research topics and themes. How did you go about it?
Ah, research. That’s a double-edged sword these days due to the profusion of material courtesy the internet. I slogged a lot for The Shakespeare Murders, took nearly a year to research the novel. In this case I began first by going back to Shakespeare and re-reading all my favourite plays, particularly Hamlet, Macbeth, Antony and Cleopatra, The Tempest, Romeo & Juliet, Much Ado About Nothing, Henry IV Parts I & II and The Merchant of Venice. Then I studied the great commentaries on Shakespeare by luminaries like Frank Kermode, Andrew Gurr and others. I made exhaustive notes and watched some BBC shows on Shakespeare’s plays, movies, too like Ralph Fiennes’ Coriolanus, the recent Macbeth (with Michael Fassbender in the lead role), and a few others. It was hard work but lots of fun!

What is the best aspect about your writing that you love most?
The best thing about writing is the joy of creating new worlds and new characters! It’s the most exciting thing, the ability to create people and their destinies, albeit in an imaginary dimension. Since I write crime thrillers, there’s the added kick of suspense and intrigue.

Is getting published traditionally really tough? Share your views.
Yes, it’s hard. Very, very hard for most people. There are a lucky few who get quick breaks but that isn’t what usually happens. One has to develop a thick skin and maintain a dogged determination to succeed. Also, you usually need an agent nowadays. Unfortunately, getting an agent is almost as difficult as getting published. I was fortunate enough to get signed on by the Delhi-based Red Ink Literary Agency but it took many years of searching before I got them.

What do you feel about the Indian literature arena? Do you read Indian authors?
Umm, no, I haven’t read many Indian authors except for Salman Rushdie and Vikram Seth. However, I am aware of the enormous strides Indian writers have made in the recent past. It’s great to see so many writers succeeding.

Tell us about your recently published book or the upcoming book?
The Shakespeare Murders is my recently published book. It’s an Elizabethan thriller set in 1602. The backdrop is the London Stage. Shakespeare used to write for a company of players (as actors were called in those days) called The Chamberlain’s Men. They performed at The Globe Theatre in Southwark, London. When my novel opens, there’s a killer on the loose and he’s knocking off Shakespeare’s fellow actors. The company’s patron The Lord Chamberlain hires a valiant young knight called Geoffrey Drake to try and catch the killer. How he achieves this forms the main theme of the novel. The Shakespeare Murders is available on Amazon and in major bookshops across the country. The publisher is Tara India Research Press.

There are many new writers out there who are aspiring to get their work published. What would you say to them?
I would quote Sir Winston Churchill and say: ‘Never give up. Never, ever give up.’ I decided I would keep trying for the rest of my life and I’d joke that perhaps I’d be the oldest writer to get published at the age of 80! But there really isn’t any other way. You either write or give up. To me, the latter was never an option because I love writing so much! And, yes, I write in long hand, the first two or three drafts. Only then do I use my laptop.

Check out more about her:
Please visit her website: www.sharongupta.com for more details of her writing. She have also uploaded some interesting videos there. Her blog: https//sharonwriter.blogspot.in has copies of articles and short stories including an interview with the rock band, No Doubt! So do check these out.

Thank you so much Sharon, for sharing your experience with us. This will definitely help others to learn from it. If you liked this interview, share it with your friends on Facebook and Twitter.

August 21, 2018
Florencia LaChance was born on August 11, 1967 and spent most of her childhood being raised in Maine.  She was given up to the State of Maine at age 13, after suffering sexual and physical abuse and became extremely rebellious and self-sabotaging.  With the help of some key mentors, she got herself together by age 16, emancipated herself and became self-supporting. At age 17 she was accepted to Boston College, an achievement after being in over 16 foster homes.  She had a son two months after turning 19, Joshua (aka Whoislogic on Soundcloud and Insta) who motivated her to truly make something of herself.  Mulatto: Daughter of America is her 8th book, first published and currently a Top-Seller in YA Bio.

In an interview to TALKTOBLOGGER.COM,Florencia LaChancegets talking about her books, readers, roaring success, and of course her thoughts on life! Catch the interesting conversation here!

What motivates you to write?
I write because I must.  I am filled with ideas. Stories, fantasy’s an…
5 comments
Read more

October 23, 2019
I am an entrepreneur by soul and writer by passion. I started very early into the business arena and launched my IT/ERP company when I was 28 years old. Since then life has been a roller coaster ride with a lot of ups and down for me but earned some amazing experiences which I treasure as achievements.
Writing was something I tested in my younger days but it took a serious passion after Facebook came into existence and I started posting extempore on Facebook. “Rooh” is my first published book on poetry. My achievement for the book is that it has been overwhelmingly received and praised by readers. I was also lucky to get reviews on ‘Rooh” from famous writer/poet, Shree Munnawar Rana ji. Rooh is not just a book but accumulated treasure of emotions and feelings of humans, which everyone will experience while reading it.
In an interview to TALKTOBLOGGER.COM,Mehul Davegets talking about his books, readers, roaring success, and of course his thoughts on life! Catch the interesting conversa…
Post a comment
Read more

June 30, 2019
I am a mum of 4 adult children and 1 teenager. I went public with my autobiography specifically to help people who find themselves in a dark place like used to be in. I hope you enjoy reading my story.
In an interview to TALKTOBLOGGER.COM,Elizabeth Moldovangets talking about her books, readers, roaring success, and of course her thoughts on life! Catch the interesting conversation here! What motivates you to write?
I write very simply and enjoy helping other people by encouraging them and receiving very positive feedback from them. I get very motivated to keep writing about my life. What was the feeling when your first book got published? How did you handle that moment of glory and self-pride, were people supportive or something else? There really was no moment of glory or self pride. I was quite shocked because I had no control and the entire process was rushed and I felt a lot of stress because the publishers seemed to have no clue as to what they were doing. Initially they sent the …
1 comment
Read more